Finding your child:
After spending MANY Spring Breaks at Ciudad with Lipscomb, I decided to lead a Singles class trip through Harpeth Hills, and I even got “roped into” (there was no convincing necessary!) translating for some amazing citizens of Montgomery, Alabama! One summer, I got to test out my wings as a mission team coordinator while on the island, managing the team and its daily meetings. 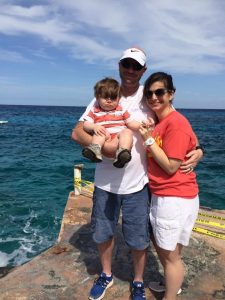 My roles were many, but I kept feeling this urge to “do more” with Ciudad de Angeles, Inc. I asked to have my name added to the sponsor list. Committing to this was a BIG.DEAL for me. I overthink, overplan, overquestion, and overworry E.V.E.R.Y.T.H.I.N.G! in life. So I sent my email.
I was asked what I was looking for in a sponsor child, as they love to match sponsors and children intentionally. I had no idea.
The year that I was in Cozumel in March, May, and July, there was a little boy who had just gotten there. Soon after, I was asked if I wanted that boy. I thought and prayed. Then I declined. I had visions of a girl.
I think it was the that same summer that 3 brothers and 3 sisters came. Beto was the youngest by far: few words, lots of wished-for naps, and toddle-running. I would love to say that we made an incredible bond in a week and my life was changed, but that’s not how it went. 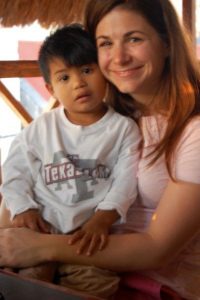 I spent that week AGONIZING over which kid would be my sponsor soulmate. I overthought.
But after leaving that week, I knew I wanted that darling boy who was the youngest. I knew that my commitment to this place was solid and for as far forward as I could see, so I decided to make the longest possible commitment at this point and choose the youngest child. A boy.
I felt silly writing that email after having turned down a boy just weeks or months before.
But I’ve never felt silly about the choice since. Beto is my perfect match (more to come on that later this week). And I only post a picture of Landregan in Mexico near the age of that beginning time sponsoring Beto because I truly feel that he in a small way prepared me to be a boy mom.
***If you have any desire to see your finances support kids’ well-being in a place you can visit and spend quality time with them, please please reach out. I’d be happy to give you details of how you can serve and support.
Posted in Uncategorized