Geovany, and his older brother Damian, were the second and third children to enter Ciudad de Ángeles.  They arrived in August, 2002 and Geovany was 5 years old.

Today, Geovany is 20 years old and has truly grown up at Ciudad.  His brother, Damian, still lives on the island and they see each other when they have the opportunity.  He was baptized in 2016.

Geovany has completed his third year of university study, and has one more before graduating.  He is studying Marketing and Business and currently works at City Hall in Cozumel.

He likes to cook, but doesn’t find much time to do that.  Still, he says he likes every kind of food.  His favorite sport is basketball and Kobe Bryant is his favorite player.

For fun, he enjoys riding his bike, listening to music, and spending time with his friends.  His best friend is Norma.

as a way to travel the world.  He would also like to see other parts of Mexico and maybe even travel to the States to visit his sponsor families. 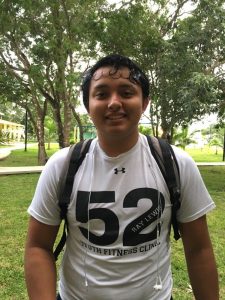 Eventually, Geovany would like to get his pilot’s license and learn to fly the bigger planes and/or helicopters.