Floridalma and her “sister,” Dulce, were the fourth and fifth children to arrive at Ciudad de Ángeles on August 28, 2002.  She was 4 years old at the time.

While not actually “blood sisters,” Floridalma and Dulce were being raised as sisters by Dulce’s grandmother.

Since graduating high school, Flor has been studying tourism in the university and has two
years left to complete her degree.  She would like to work on a cruise ship, but

she also dreams of acting in plays.  She remembers fondly the plays and skits 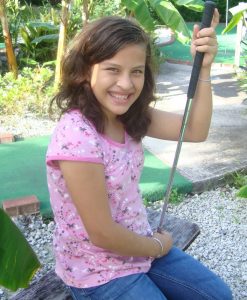 she’s been in at church over the years and would also love to visit Broadway.

Flor hopes to improve her English and very much enjoys practicing with visitors and mission teams that come to Ciudad.  She’s also been inspired by the mission teams who regularly come and would like to serve on mission teams visiting other locations and working with children.

Flor’s favorite color is green and she likes reading books, listening to pop music, swimming, and walking with her friends.  Her favorite TV show is King of the Sword.

Flor was baptized in April, 2015 and her favorite Bible stories are when Jesus sent the demons into the herd of pigs and when God rescued Noah and his family in the flood.