Carlos arrived at Ciudad de Ángeles in November 2003 at the age of five.  He loves to play soccer (fútbol) and it is his favorite past time, as well as his favorite sport.  His favorite teams are Mexico Tigres and the team from Barcelona, Spain.

Carlos likes POP music, both in Spanish and English, and he likes to take walks while listening to music, though he does not consider himself to be musically inclined.  He also doesn’t care for cooking, but he likes to read and he likes taking care of Nala, the dog.

Carlos says he is her special person and she follows him everywhere he goes.

Carlos was baptized in July 2016 and he is often called on for a prayer or scripture reading in services or devotionals.  His favorite Bible story is about Jonathan and David, because they were such good friends, and his favorite time of year is June/July, when mission teams come to Cozumel.

He loves visiting with the Americans and making new friendships.

Carlos graduated from high school in July 2017.  He started college classes in the fall, but is currently taking a break from his studies in order to evaluate plans for the next phase of his life.

He plans to start back to classes next fall.  When he was young, he wanted to become a writer, but now he thinks he would like to be a coach or PE teacher in school.

He wants to be able to play with the kids and teach them sports.

While he is not in school, Carlos has begun hosting tour groups from cruise ships who visit Ciudad.

He mentions how much fun he is having interacting with them and he gets more comfortable every day. 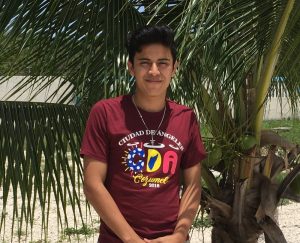 As he tells the story of Ciudad to the visitors, he demonstrates first hand how growing up at Ciudad has a profound impact on the lives of our children.